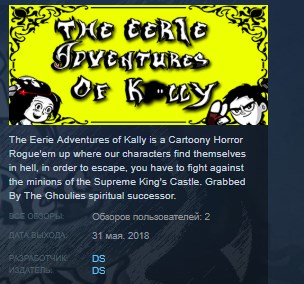 Enjoy your way into one of the craziest beat´em ups! Be a helper soul, take your weapon and destroy everything on your path!

This is a BETA build currently. Content is being added constantly! So please bring me your feedback to improve more this experience.

Kally was once known as a lonely girl, without family and friends. Maybe that was the reason... she died.

Now Kally has found out she is in hell, where darkness is everywhere and horrendous creatures want to devour her.

She meets a new companion: Eerik, who died in strange circumstances and was apparently locked in jail.

The Grim Reaper appeared, and Kally and Eerik thought it was over and that Death-himself was taking their souls with him.
But Eerik caught Grim Reaper off-guard, stole his scythe, and gave it to Kally.

After an intense fight, Eerik cut off the head of Grim Reaper and decided to bring it with them as proof of their strength.

Death´s head tells them that in order to escape and go back on earth among the living, they must take down the supreme king...
And he is on top of the hills...
Inside a huge castle guarded by demonic creatures!

There awaits the darkest adventure of our lives!

This rooms are magic portals, any door could bring you anywhere, where you gonna go?

¿ How long can you survive ?
ИНСТРУКЦИЯ ПО АКТИВАЦИИ: